As Governments Struggle to Contain Coronavirus, Doctors Get Inventive 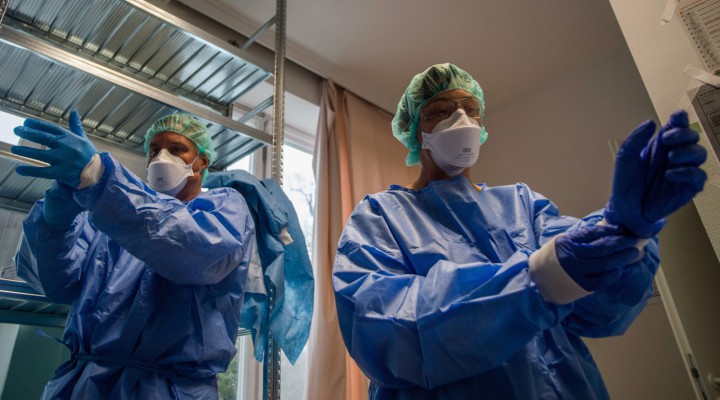 From “full-on MacGyver” ventilators to homemade test kits, doctors – and even some governments – are turning to ingenious solutions in the face of a faltering global response.

MPN– At doesn’t look like much. In fact, it looks like garbage: a cheap plastic hose inserted into a metal box. But Dr. Rhys Thomas’ invention is worth its weight in gold – and it’s already saving lives. Dr. Thomas, a senior consultant at Glangwili Hospital in Wales, has designed, prototyped and constructed a working ventilator in just three days – a machine of critical importance in fighting COVID–19. Ventilators help patients breathe, a crucial machine in the fight against the respiratory illness that has infected at least 438,000 people worldwide. They are in critically short supply in many countries. “It is simple and robust and specifically designed to work against COVID virus in a contagious environment,” said Dr. Thomas. “Although it won’t replace an ICU ventilator, the majority of patients won’t need intensive care if they are treated with this ventilator first.” His invention has already been used to treat a patient in Wales who contracted the virus. The patient is now on the road to recovery.

The machine can also clear rooms of viral particles, ensuring those inside breathe only clean air. Dr. Thomas notes that its ease of use will release nurses for other duties. A local engineering company that produced plastic fabrication equipment has been recruited and aims to make 100 per day at their factory.

Another British company that was working with anti-viral fabrics has rushed through the development of an antiviral snood (a cross between a scarf and a hood). It hopes to ramp up production to as much as a million per week, saving many for health workers. The snood covers the mouth and nose and is thought to block the coronavirus completely. Meanwhile, inventor Wyn Griffiths has designed a 3D-printed hygienic door handle, one that allows the user to open doors with their forearms, rather than their hands. He has distributed the design online so anyone can download it freely.

After a slow response to the pandemic, the British government has sprung into action, recruiting 11,000 retired medical workers and 24,000 final year student nurses to aid the National Health Service (NHS). Last night Health Minister Matt Hancock called for the creation of an NHS “volunteer army” of a quarter-million people in England who would risk their lives to assist medical staff in delivering food and medicine, ferrying patients to and from the hospital, and phoning the isolated. There was an overwhelming response, and it hit its target well within 24 hours.

NEWS: Today we launch NHS Volunteers – we’re calling on those in good health to support our NHS across the country. Details: https://t.co/gUrlid1ud6 pic.twitter.com/vPbXuHaiNu

But it is not just in the United Kingdom that human ingenuity is being mobilized against the coronavirus. A group of doctors and engineers at the University of Minnesota are touting a newly designed ventilator that they believe can be made for as little as $150. Going “full-on MacGyver,” according to anesthesiologist Dr. Stephen Richardson, he believes his team’s invention will “give people a chance” against the virus. The group is looking for production partners, especially those in sheet metal fabrication, or who can make pressure relief valves or ball joint rod ends. They believe they can make thousands per week. In Italy and Spain, too, engineers have pioneered 3D-printed ventilators and put them into production. The University of Minnesota’s A prototype $150 ventilator

Hipsters are doing their part too. Brooklyn’s craft distilleries have halted gin and whiskey production and moved into the hand sanitizer business. “I don’t think the future is too bright for gin right now,” said Stephen DeAngelo, founder of Greenhook Ginsmiths. “This helps to keep my staff busy at this time, and we’re doing a lot of good for the hospitals as well.” He already has two orders from hospitals, one for 2,500 gallons and another for 1,700. The hand sanitizer comes in trendy glass bottles once intended for artisanal gin.

Meanwhile, the Vietnam Military Medical University has developed a cheap and extremely quick COVID–19 test kit. Produced for between $17 and $26 per test and taking around two hours to generate a result, the producers say they are able to manufacture up to 10,000 per day and have already begun to export them, including to virus-struck Italy.

China and Cuba are also aiding Italy, both sending battalions of medical personnel, as well as crucial supplies. In the midst of a global pandemic, increasing numbers of people are realizing there is no individualized solution to the problem facing humanity. Rather, we must work together to harness collective, collaborative power to defeat the virus. As Carlos Armando Garcia Hernandez, a Cuban nurse traveling to Italy said,  “This is a global battle and we have to fight it together.”

As Governments Struggle to Contain Coronavirus, Doctors Get Inventive

0 thoughts on “As Governments Struggle to Contain Coronavirus, Doctors Get Inventive”