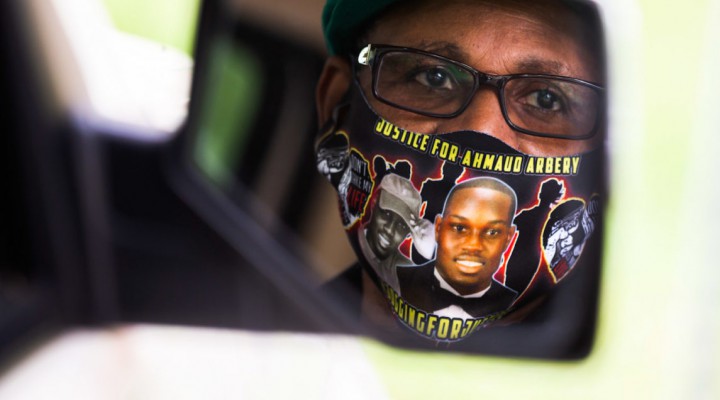 The New York Post, a paper infamous for its close relationship with the police and a long history of defaming black victims of white violence, now has Arbery is in its sights.

MPN– In a hit piece released yesterday, The New York Post published police footage from the 2017 arrest of recently slain Georgia native Ahmaud Arbery. The footage shows the young man in handcuffs on suspicion of shoplifting from a local Walmart. Why this is in any way newsworthy, notable, or fit for publication is unclear. But the effect has been to smear the latest prominent black victim of police violence.

Other questions abound: if this was police footage, why did the police release it, if not to defame him? The video shows police questioning Arbery about a television, but the Post itself admits that it did not bother finding out the result of the questioning, publishing it without even ascertaining if he was guilty or not.

On the afternoon of February 23, 2020, the 25-year-old Arbery was jogging near his home in Glynn County, Georgia, when he was spotted by an all-white gang led by former police officer Gregory McMichael and his son, Michael. The heavily armed group chased the young black man for some time in their pickup truck, eventually getting out and shooting him three times with a shotgun. A third conspirator, William Bryan, filmed the incident. Local police responded to the murder immediately, but treated the three extremely leniently, not even describing Bryan and the elder McMichael as suspects, but as a “witnesses.” Despite having Bryan’s footage of the event, no arrests were made for 74 days, and only then after the video went viral online. Remarkably, the footage was uploaded by the group themselves in the mistaken belief that it would fully exonerate them. Instead, it triggered an international uproar that forced the police into action.

The Post, a newspaper infamous for its close relationship with the police, has a long history of publishing “copaganda” and defaming black victims of white terror. In 2017, for instance, a Maryland white supremacist traveled to New York City with the express intention of killing black people. There, he stabbed 66-year-old black man Timothy Caughman with a two-foot sword multiple times, part of a campaign against interracial dating he was planning. In its write-up of the story, the Post described Caughman as a “career criminal” who had “11 prior arrests” and had been “acting combative before his death.” In contrast, it called his racist killer as “well dressed” and “dapper.”

The practice of slandering black victims of white supremacist violence while humanizing its perpetrators is not limited to just the Post, however. When police officer Darren Wilson murdered Michal Brown in Ferguson, Missouri in 2014, the incident sparked a popular outcry. However, the media were quick to choose sides. One guest on CNN described Brown as a “thug” who “set upon” a police officer, while The New York Times described Wilson as “well-mannered” and “soft spoken” while presenting Brown as “no angel” and someone who “dabbled in drugs and alcohol” while writing “vulgar” rap lyrics, subtly suggesting the killer was, in fact, the true victim in all this.

One year later Freddie Gray died of spinal injuries after being brutalized by the Baltimore police. CNN went on the offensive to slander the African-American man authorities had subjected to a “rough ride” – i.e. tortured to death for fun, writing him off as the “son of an illiterate heroin addict.” After significant pushback, they amended their article.

Over thirty years ago media scholars Edward Herman and Noam Chomsky developed their theory of “worthy victims,” where the coverage of the deceased – whether extensive or minimal, positive or negative, exactly corresponds to how much political capital the elite can make from their deaths. People killed by enemy regimes, for example, will be treated like martyrs. On the other hand, those killed by the U.S. allies will be ignored or downplayed. Those victims whose deaths expose the savagery of the American state are reserved a special, fervent hatred in the corporate press for undermining the idea of fundamental American exceptional benevolence.

Commenting on the murder, veteran civil rights campaigner Jesse Jackson said that Arbery’s slaying became “a global embarrassment for whites.” “For blacks, however, it is another humiliation, a continuing terror. It is the normal silence, however, that condemns thousands of African Americans to unjust deaths and millions to shattered lives. When the camera turns away, the savage injustice that embarrasses us becomes simply business as usual,” he added.

Feature photo | A man waits in his care for a rally and call for justice against the shooting death of Ahmaud Arbery, May 16, 2020, in Brunswick, Ga. Stephen B. Morton | AP