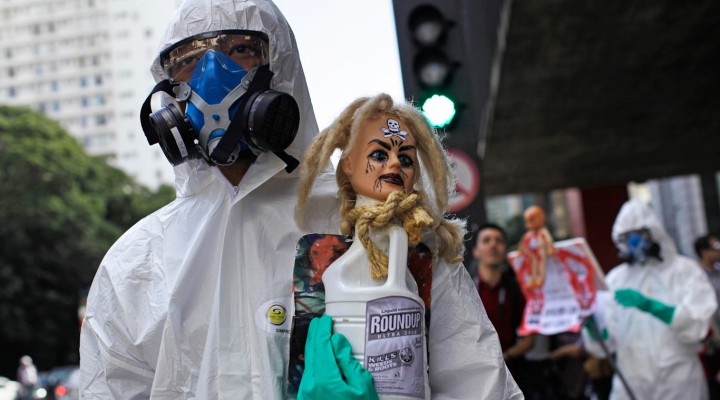 The US is considering approving the product even as Monsanto juggles multiple multi-million dollar lawsuits from cancer patients over its deadly Roundup herbicide.

MPN– The United States Department of Agriculture is currently considering approving a new Monsanto corn genetically engineered to be used with five deadly herbicides. The vast majority of soy and corn grown in the United States is Monsanto’s patented Roundup Ready product. Roundup is the trade name of glyphosate, a chemical agent widely accepted as causing cancer in humans, including by the World Health Organization and the State of California. Monsanto’s new corn, however, is designed to be used not just with glyphosate, but also with dicamba, glufosinate, quizalofop, and 2,4-D.

The fact that the U.S. government may be expanding — not reducing — the amount of deadly chemicals used in food production is remarkable, considering that this week Monsanto’s parent company, Bayer, announced it was paying nearly $11 billion to settle a myriad of lawsuits from cancer patients over claims Roundup causes the deadly condition. In 2018, a California court ordered Monsanto to pay former school groundskeeper Dewayne Johnson $289 million, finding that Roundup was a factor in his terminal cancer. And last year a federal court awarded $80 million in damages to an individual who sprayed the product on his lawn for years, opening the floodgates for far more lawsuits. Yet the government appears to still be protecting Monsanto; in January the Environmental Protection Agency insisted that glyphosate did not cause cancer, non-Hodgkin’s Lymphoma, or any other fatal condition. “This administration’s troubling allegiance to Bayer/Monsanto and the pesticide industry doesn’t change the trove of peer-reviewed research by leading scientists finding troubling links between glyphosate and cancer,” said Lori Ann Burd, director of environmental health for the Center for Biological Diversity.

The idea that there is no connection between Monsanto products and health problems will certainly be news to the people of Vietnam. During the Vietnam War, Monsanto’s Agent Orange was dropped across the country, destroying more than 3.1 million hectares (around 12,000 square miles) of forest. 12 million gallons of Agent Orange were produced during the time period. The substance is well known to cause birth defects, retard fetal growth, and reduce female fertility, with symptoms lasting for generations. The consequences of the bombings are impossible not to notice for anyone traveling in Vietnam today, such as the ubiquity of severely disabled people. The Vietnamese Red Cross estimates that up to one million people (over one percent of the population) are disabled or have health complications as a direct result of exposure to the chemical. “Vietnam has suffered tremendous consequences from the war, especially with regard to the lasting and devastating effects of toxic chemicals, including Agent Orange,” said Nguyen Phuong Tra, the country’s deputy foreign ministry spokesman.

Environmental group the Pesticide Action Network has described Monsanto’s latest invention as a “truly terrible idea.” One of the many reasons why the Department of Agriculture’s decision is so important, they claim, is that the use of Roundup has already led to the development of “superweeds” resistant to the chemical, putting the country on an ever faster “pesticide treadmill,” which will have devastating consequences for the environment, animal and human life. Spraying so many chemicals on fields already seriously harms other outdoor areas like woods, rivers, parks, and organic farms, with superweeds taking over these areas, leading to a situation where pesticides will become increasingly necessary for anything to grow.

Glyphosate is now everywhere, including in our bodies. One academic study found that the number of southern Californians whose blood tested positive for glyphosate increased by 500 percent between 1993 and 2016, with the levels of the substance spiking by over 1,200 percent over the same period. A 2018 study of 45 breakfast products, including cereals and oat bars, found that all but two of them contained dangerous levels of the chemical. Around 1.8 million Americans will be diagnosed with cancer this year, according to the National Cancer Institute.

Monsanto is also playing a role in driving U.S. policy in Latin America. In 2004, the socialist president Hugo Chavez banned GMOs, effectively ending the company’s presence in Venezuela. U.S.-backed self-declared president Juan Guaidó has pledged to allow Monsanto back into the country, giving it free rein and a fresh new market. Bolivian dictator Jeanine Añez has also done the same, issuing a supreme decree forcing through the use of GMOs in the country’s relatively organic agricultural system.

The Pesticide Action Network is calling for a move away from a system dominated by multinational giants like Monsanto and towards a Green New Deal for Food and farming that would end the chemical-intensive system of agriculture, urging people to oppose Monsanto’s latest plans.

Feature photo | A protester wearing a protective suit and mask holds up a bottle of Monsanto’s Roundup herbicide during a protest against Monsanto in Sao Paulo, Brazil. Nelson Antoine | AP