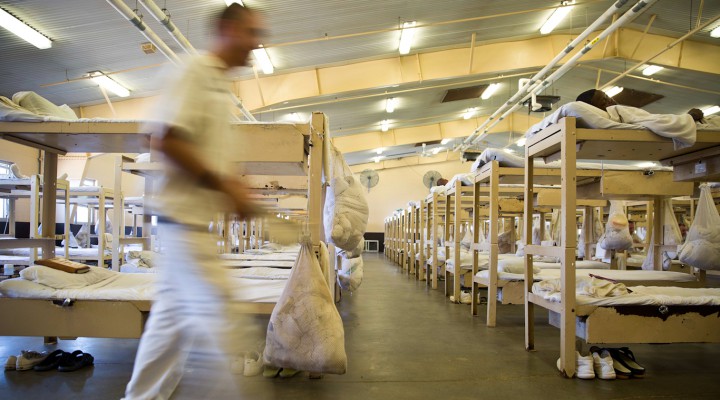 Doctors are warning that the huge numbers of inmates locked inside large communal cells, often with dozens of other people, a perfect breeding ground for disease.

MPN– Amid the worsening COVID-19 pandemic, doctors across the United States are warning that prisons are a ticking time bomb. Dr. Ross MacDonald, the Chief Medical Officer for Correctional Health Services in New York City, sent a dire warning to city and state legislators yesterday.

“We who care for those you detain noticed how swiftly you closed your courts in response to COVID-19. This was fundamentally an act of social distancing, a sound strategy in public health. But the luxury that allows you to protect yourselves, carries with it an obligation to those you detain. You must not leave them in harm’s way,” he wrote, ominously adding that, “a storm is coming” and claiming they could no longer look the other way.

While prisons are very good at stopping humans from exiting the premises, they are powerless to stop viruses from entering. And while the traditional image of American jails is that of isolated inmates, perhaps sharing a cell with only one other person, the reality is that huge numbers are actually locked inside large communal cells, often with dozens of other people, a perfect breeding ground for disease. There are around 2.3 million Americans currently incarcerated, and the prison system is at over 100 percent of its capacity as a whole.

While various states’ authorities have claimed to be taking extra precautions against the virus, Illinois prisoners report having no access to even basic sanitary products like soap or cleaning supplies, putting them at extra risk.

Iran, a country with a relatively conservative government, has released around 85,000 prisoners in an effort to combat the spread of COVID-19. The U.S. has begun to do the same, but only in drips. In an op-ed in the Washington Post, health experts wrote that “Unless government officials act now, the novel coronavirus will spread rapidly in our jails and prisons, endangering not only prisoners and corrections workers but the general public as well,” recommending that authorities should release all those that do not pose an immediate danger to the public, and also to reduce arrests and delay sentencing. Immigration and Customs Enforcement, however, have used the opportunity to increase their assault on undocumented workers.

Rachael Bedard, a doctor at the infamous Rikers Island prison in New York, revealed that inmates are petrified of contracting the illness: “Last week I did something excruciating: I walked around from dorm to dorm talking to folks about coronavirus. I was honest with them- that we’d try our best to protect them, but that this pandemic was bad and that we couldn’t promise to keep it out,” she wrote on Twitter, adding that COVID-19 “cannot be kept out, and once it’s in, it will spread like wildfire.” There are already reports that the virus has reached Rikers Island.

While Mayor Bill de Blasio announced on Wednesday that he would begin identifying candidates for release, including those with underlying health problems and those incarcerated for minor offenses, his predecessor, Mike Bloomberg, drew up a plan of action to put inmates to work digging mass graves on nearby Hart Island.

The United States has by far the largest prison population in the world. Draconian punishments, a for-profit prison industry, a racialized justice system and the system of cash bail all contribute to the fact that almost a quarter of all those incarcerated worldwide are American. A recent Chinese human rights report on the U.S. highlights the country’s prison system as a major shortcoming. According to the World Prison Brief, the U.S. locks up its citizens at over five times the rate China does.

As of Friday morning, the United States has announced 14,250 confirmed cases of COVID-19, and the virus has been spotted in all 50 states. Health officials recommend staying inside your home as much as possible, washing your hands with soap and water regularly, and avoiding touching your face. Many countries have already enacted a total lockdown.

MacDonald ended his message with a straightforward request to the government: “We have told you who is at risk. Please let as many out as you possibly can.” If his warning is not heeded immediately, the storm may be particularly deadly.

Feature photo | A prisoner walks near his crowded living area in Elmore Correctional Facility in Elmore, Ala. Brynn Anderson | AP