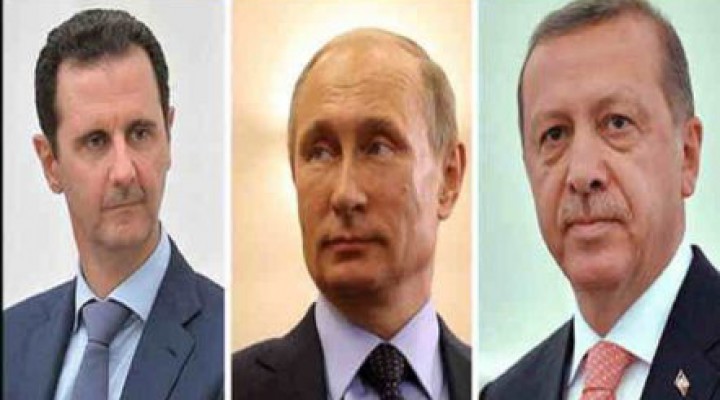 Turkey has a lot to lose if it doesn’t back down in Syria, and pledges of US support can’t be taken seriously

Russian President Vladimir Putin has conspicuously failed, so far, to respond to his Turkish counterpart President Recep Tayyip Erodgan’s repeated requests for a face-to-face meeting to discuss the escalation of military clashes in Idlib province, which risks leading to all-out war as the Syrian army advances in the area, retaking dozens of villages and three key towns – Khan Shikhoun, Maarat an-Nu’man and Saraqeb – and reopening the main Damascus-Aleppo and Aleppo-Latakia highways for the first time in 12 years.

Putin’s stance reflects his disapproval of Erdogan’s military build-up in Idlib, which violates the agreement he reached with him at Sochi, and his bid to force him to negotiate a new deal that compels Syrian forces to withdraw from the areas they have recaptured in recent weeks and endorses the Turkish military presence in Afrin, Jarablus and al-Bab.

The failure of the talks held in Ankara between Russian and Turkish military chiefs about Idlib means the Russians do not agree to any of Turkey’s demands. They insist that Erdogan re-commit to the Sochi agreement and implement it to the letter rather than manoeuvring to gain time. Otherwise, the military option that the Syrian army has begun to pursue with Russian air and ground support will be the only choice left.

The bravado Erdogan tried to show, by announcing his forces had ‘neutralised’ 101 Syrian soldiers in response to the death of 11 Turkish troops when the Syrian army shelled their observation post in Idlib, backfired against him. The claim was shown to be false – the pro-opposition Syrian Observatory for Human Rights said no Syrian troops had been killed in any Turkish attacks — and a mere ploy to deflect Turkish public anger at the casualties. Tate toll can only rise if the clashes continue in the days to come.

Three important considerations need to be taken into account before trying to foresee the likely consequences of the escalation.

First, the US has lost its bet on the armed Syrian opposition, specifically the Free Syrian Army. Its forces retreated from the three towns without putting up a defence in the face of advancing Syrian government forces, which suffered barely any casualties.

Second, Turkey’s 12 observation posts in the Idlib countryside, set up under the de-escalation agreements, have turned into a liability. Seven of them are now completely surrounded by Syrian government troops. They could be easily destroyed, and the 100 soldiers manning each of them killed if the Turkish military launches an assault on Syrian forces.

Third, Russia’s resolve to support the Syrian army offensive has only been strengthened by Monday’s twin drone attacks on its Hmeimim airbase launched from Idlib by the Turkish-backed Hay’at Tahrir ash-Sham (the former Nusra Front) – even though the drones were brought down.

The Syrian army is no longer taking seriously Erdogan’s repeated demands that it withdraw to pre-Sochi lines and give up its recent gains. In a statement on Tuesday, it vowed to retaliate against any Turkish attempt to impede its progress in Idlib. That could take the form of an attack on the observation posts with a green light from Russia.

The US’ pledge to support its ‘Turkish ally’ in Syria is not being taken seriously either. The US is not so much ‘supporting’ Turkey as luring it into a potentially ruinous trap.  Its declaration of support is more likely to be taken as a personal affront by Putin, and he doubtless has contingency plans in place to counter it and respond to any further Turkish advance. His refusal to meet Erodgan indicates he is determined to see the plans he agreed with the Syrian leadership to retake Idlib – and then move on the east of the Euphrates – through to a conclusion.

Reliable sources say Putin is furious at Erdogan’s rejection of his proposal that he held a summit meeting in Sochi with Syrian President Bashar al-Asad under Russian auspices to revive the 198 Adana agreement – even though security chiefs Ali Mamluk and Hakan Fidan held preparatory talks for such a summit and agreed on an agenda.

Erdogan squandered another golden opportunity to avoid a direct showdown in Idlib by turning down Iranian Foreign Minister Mohamed Javad Zarif’s offer for Iran to broker negotiations between Turkey and Syria on a political settlement.

Meanwhile, nearly one million people are reportedly trying to flee the fighting in Idlib, and Turkey faces the prospect of hundreds of thousands of Syrians forcibly storming over its border, many of them armed. This could result in mayhem, both on the border and within Turkey. Should that happen, Erdogan’s chickens will truly have come home to roost.