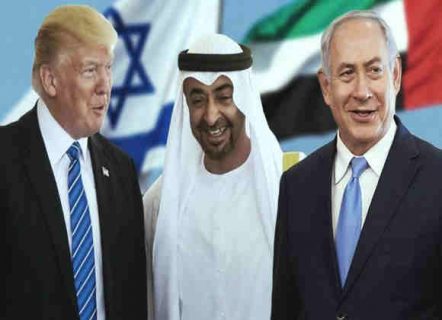 Gulf rulers think they’re buying protection against Iran and Turkey, just like the Palestinians bought into the fake promise of independence

Shimon Peres, Israel’s shrewd former prime minister, once described the Oslo Accords as Israel’s ‘greatest invention.’ The UAE-Israel agreement due to be formally signed next month can be seen as an equally great and duplicitous ‘invention’ by its architect Jared Kushner and his mentor Benjamin Netanyahu.

The former agreement, signed in the White House Rose Garden on 13 September 1993, sold the Palestinians the illusion that they would get an independent state on the 1967 borders and the Gaza Strip would be turned into the ‘Singapore of the Middle East’. The latest deal is designed to sell the Arabs an even more dangerous illusion: the creation of a ‘Sunni’ Arab bloc led by Israel to confront Iran and Turkey and their regional leadership ambitions — with Abu Dhabi being turned under US and Israeli auspices into the ‘Sparta’ of the Arabian Peninsula, equipped with an arsenal of impressive and expensive weaponry featuring the ultra-sophisticated F-35 combat aircraft, pride of the US armaments industry.

Israel and the US did not single out the UAE for this role on a whim. They considered the choice carefully and waited for the right conditions and timing. Like other Gulf monarchies, especially Saudi Arabia and Bahrain, the UAE’s regime suffers from severe paranoia about Iran’s growing might and the threat that could pose amid the rise of other regional powers like Turkey. Israeli and American planners exploited this weakness – just as they exploited the weakness of the PLO, besieged and bankrupt after the 1990 Iraqi invasion of Kuwait, to lure it into negotiations leading to the Oslo Accords. The trap was sprung and we all know where it resulted.

Twenty-seven years after signing the Oslo agreement, the PLO leadership is even more embattled and isolated than it was then. It did not obtain an independent state or even meaningful self-rule. What it ultimately got was a ‘Deal of the Century’ providing for the annexation of 30% of the West Bank and the entire Jordan Valley along with Jerusalem and the expulsion of most of the Palestinian inhabitants to Jordan where the ‘alternative homeland’ plan is to be located. Arab leaders no longer take phone calls from President Mahmoud Abbas. His private plane parked at Amman airport is gathering rust and dust, and is set to continue doing so until further notice.

Emirati officials who claim the new ‘peace’ agreement is underpinned by US ‘guarantees’ would do well to remember that such guarantees also accompanied the Oslo Accords. One of Yaser Arafat’s aides at the time, Bassam Abu-Sharif, recalled in a recent article in this newspaper being told by Peres that the late Palestinian leader was mistaken if he thought the agreement would result in the establishment of a Palestinian state, as no Israeli would consent to that. The most he could hope for was autonomy under Israeli sovereignty. Arafat later realised that Peres was right. His successor, Abbas, eventually realised that even autonomy was no longer attainable. He now sits in his office in Ramallah awaiting two possible outcomes: assassination, like his predecessor, or deportation to Jordan.

Netanyahu has restated that he remains committed to annexation despite his supposed pledge to Abu Dhabi to halt it. One of his aides also confirmed that Israel has vetoed any delivery of any part of any F-35 to the UAE. This should not come as any surprise given the failure of the US and Israel to live up to so many previous promises.

The strategy of Israel and the US is based on on inflaming and deepening sectarian Sunni-Shia tensions in the Middle East. They see their ‘peace’ agreement with the UAE as the spearhead of this plan. This is the single gravest threat facing the region at present. It reminds us of the Hussein-McMahon correspondence during the First World War which led to the Great Arab Revolt against the Ottoman Empire. That century-old ‘game changer’ promised the Arabs much, but ended up with the Sykes-Picot agreement that placed them under British and French tutelage.

History now seems to be repeating itself in various ways. Most Arab rulers are oblivious to this, either due to their ignorance of history or their inability to learn anything from it — even though some of them were educated at top Western universities and academies.