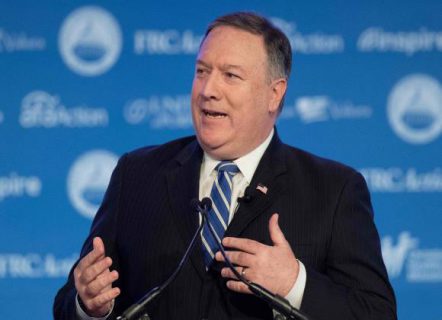 French Foreign Minister Jean-Yves Le Drian was right to point out at the press conference he held in Amman on Sunday that that the so-called ‘Deal of the Century’ is no longer on the table.  This is not only because it was rejected by Palestinians of all persuasions. It is also because it has been bypassed by events in the region, just as the Palestinian cause itself has been bypassed. The credit for that goes to the Arab regimes which started and sped up normalisation with Israel without committing to any deal, nor to the two-state solution that is the cornerstone of their unlamented Arab Peace Initiative.

A bigger ‘Deal of the Century’ is to be concocted at the Warsaw conference which US President Donald Trump has called for, and to which Secretary of State Mike Pompeo delivered invitations during his Middle East tour aimed at rallying the members of the would-be Sunni Arab Nato to become the spearhead of this new alliance.

At his speech last week at the American University of Cairo, Pompeo made only the briefest passing mention of the Palestinian cause and no reference at all to the two-state solution. This it is due to the fact this cause is no longer pivotal to events in the region and the wider world and poses no danger to international peace and stability. The reason for that is that is that its standard-bearers are no longer fighting Israeli occupation but fighting each other. The greatest aspiration of President Mahmoud Abbas is to crush the Hamas movement in the Gaza Strip, and the latter’s greatest aspiration is to delegitimise Abbas and his Palestinian Authority.

The Warsaw conference, which is to discuss confronting Iranian influence in the region, is reminiscent of the gathering in Paris that launched the 70-member US -led coalition to fight the so-called Islamic State (Daesh). Several Arab governments provided that alliance with the cover of Arab and Islamic ‘legitimacy’, as well as air cover by despatching some of their American-made F-16 warplanes.

The target of the coalition to be inaugurated at the 14 February Warsaw summit will be Iran, the Resistance Axis and the paramilitary movements aligned to it in Iraq, Syria, Lebanon and Occupied Palestine.

This new Warsaw Pact will have an American and European aroma, but Israel and the Sunni Arab Nato governments will collectively constitute its spearhead. It was perhaps not a coincidence that the capital of Poland, which hosts US nuclear deterrent missiles aimed at Russia, was chosen as the venue for this undertaking , buta considered and calculated challenge to Russia itself.

The US ‘Deal of the Century’ – which was authored by Israeli Prime Minister Benjamin Netanyahu and adopted by Trump’s son-in-law Jared Kushner, and which Saudi Crown Prince Muhammad Bin-Salman tried to market in the Arab world – failed because the necessary Palestinian ‘blessing’ could not be obtained. It was too obviously a recipe for liquidating the Palestinian cause. The impending Warsaw deal will fail too, and face the same fate as the ‘Friends of Syria’ group and before that the ‘Friends of Libya’. The utter failure of Western plans in both countries are proof of that.

There can be no comparison between Resistance Axis and the Islamic State. The former’s members passed the tests to which they were put in Iraq, Syria and Palestine with flying colours, have developed a formidable missile capacity in both quantitative and qualitative terms, and have popular support and are strongly motivated to fight, perhaps more than ever before.

We can confidently predict that we will sooner or later be celebrating the demise of the New Warsaw Pact as we did the ‘Friends of Syria’.

0 thoughts on “The New Warsaw Pact”