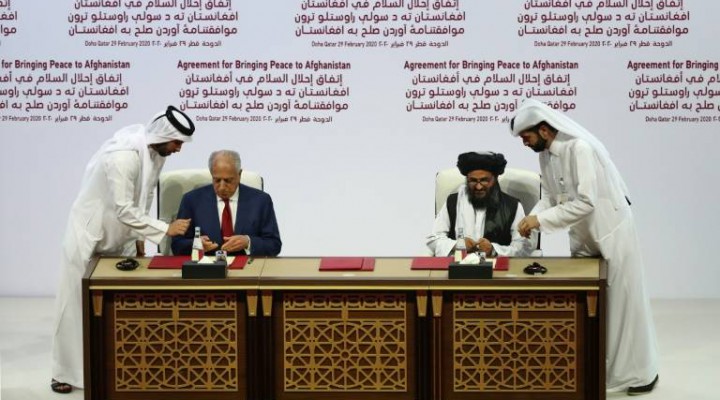 Saturday’s signing in Doha of the peace agreement between the American government and the Taliban movement — represented by Secretary of State Mike Pompeo and Taliban deputy leader Mullah Abdulghani Baradar respectively — is an admission of defeat by the Trump administration. The Salafi Taliban are celebrating victory after 18 years of fierce resistance and preparing to re-establish their Islamic Emirate of Afghanistan in Kabul, this time having obtained prior international recognition.

The deal, which the US administration describes as ‘historic’, amounts to a fig leaf with which to cover up its defeat and its acquiescence to most if not all the demands made by the victorious Taliban — who this administration, like its predecessors, had refused even to negotiate with on the grounds that they are terrorists. Wonders never cease.

The provisions of the Doha agreement remain unclear. But from what has been made public so far, they include a reduction of violence to facilitate the gradual withdrawal of 13,000 American troops, a cessation of Taliban support for any non-Afghan terrorist groups (meaning al-Qaida), and the holding of talks with the Afghan government to reach a political settlement that ends the civil war. Yet this government was not even represented at the signing ceremony and was totally excluded from the negotiations that led to it. That is how the US habitually treats its clients: with complete contempt.

The Taliban humiliated the US through their steadfastness, combativeness and perseverance, both on the battlefield and at the negotiating table. They managed to infiltrate both the American military and government forces, and secure the defection to their ranks of more than 60,000 of the government troops that the US spent an estimated $26 billion training, equipping and arming.

The war has so far resulted in the death of some 2,500 US personnel and costs American taxpayers around two trillion dollars, yet US forces supported by NATO contingents barely managed to control 20% of Afghanistan’s territory following their invasion and occupation of the country in 2001.

America promised the Afghan people great things. They were to be given democracy and economic development and their country would be turned into a model which other peoples would envoy. But now, once US forces leave, Afghanistan is set to return to where it was 20 years ago. It is unlikely that peace will be restored or the civil war will end. For one thing, who are the Taliban to negotiate an end to the war with the current president, Ashraf Ghani, or his implacable Tajik rival Abdullah Abdullah? Both claim to have won the recent presidential elections and are in the process off forming their own governments, just as in Libya.

Afghanistan’s future is unclear and nobody can predict what state the country will end up in after US forces depart. The only thing that is clear for now is the country’s ‘official’ transformation into a second Vietnam, where the US and its project were defeated leading to the withdrawal of its troops in ignominy and disgrace.

Perhaps the Arabs will learn something from the Afghans’ experience and their history of resistance: that the US, and of course its ally Israel, are not invincible or omnipotent, and can be defeated if the will and resources can be mustered to stand fast and fight back. Palestinian President Mahmoud Abbas and all the Arab normalisers should take note and consider. But they won’t. They have shown time and again that they are not in the habit of reading history or learning lessons from it.

0 thoughts on “The empire concedes defeat”