HOME / WORLD / Palestine at the crossroads 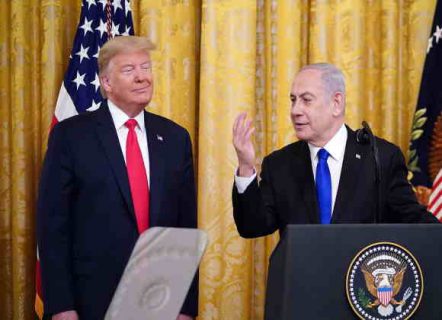 Trump’s plan leaves the Palestinians with a stark choice: surrender or resist

The ‘Deal of the Century’, was unveiled by its godfather Donald Trump and his sidekick Benjamin Netanyahu is an Instrument of Surrender for the Palestinian people and their leadership. It requires them to concede defeat and submit unconditionally to the terms of the Israeli victor. Failure to sign it will entail further repression and besiegement, and perhaps deportation to Jordan as an ‘alternative homeland’.

This is a new iteration of the apartheid system in South Africa that the whole world opposed and eventually managed to overthrow. The Palestinians in three areas with high population density — in areas ‘A’ and B’ of the West Bank and in the Gaza Strip — are to be ghettoised into ‘Bantustans’. Their security, borders, economy, water, resources and airspace will all be under the control of the Israeli government, and the Palestinians will have no choice but to serve the Israeli occupation and barely survive.

No wonder Netanyahu is celebrating, when the Al-Aqsa Mosque is to become the Temple Mount and Jerusalem in its entirety the capital of the Jewish state – whose exclusively Jewish nature must be recognised by all Palestinians — the right of return is cancelled, the settlements and the Jordan Valley annexed and the Gaza Strip disarmed. He has every right to declare the day the Deal of the Century was announced to be the greatest moment of his life, greater even than the proclamation of the State of Israel in 1948. For he was given more than he could have dreamed of by his great friend Trump.

Before we accuse the Arab regimes of selling us out, we Palestinians need to admit that it was our own submission, and the inexcusable transformation of 40,000 of us into spies and guards for the settlers, which brought us to this point. The reference, of course, is to the security forces of the Palestinian Authority (PA), which claims to represent us, and which ceded 80% of Palestine’s territory so they could have jobs, VIP passes and luxury cars and villas.

The PA and all other Palestinian groups clearly reject this deal, but rejection is easy when it is not translated into practical steps to resist the occupation in every way. This does not mean going to the Arab League or begging for sympathy from European capitals and international organisations, as we have been doing for the past two and a half decades. Twenty-six years of negotiations, encouraging Arab states to normalise, delivering long imploring speeches at the UN General Assembly and trying to join international organisations are what brought us to the miserable and humiliating position we are in now. Yet our Authority and leadership still adhere to the same path and still command the support and trust of some.

The new approach promised by President Mahmoud Abbas must not consist of issuing more appeals, soliciting more negotiations and calling for UN resolutions and international law to be upheld. It should be to light the fuse of resistance and take things back to square one: a people resisting the occupation. That must entail dissolving the PA, ending security cooperation with Israel and renouncing all the consequences of the Oslo Accords. It should also mean admitting failure, withdrawing from office, and leaving the Palestinian people to chart their future and produce new leaders capable of actually leading them in this new stage.

The white supremacist regime, which Trump wants to replicate in Palestine at Israel’s behest, was brought down by resistance, and this new Israeli variant can only be brought down in the same way. The first and second intifadas forced Israel to recognise the existence of a Palestinian people and seek the intercession of the big powers to pacify them. The Deal of the Century will ultimately be defeated, as was the Israeli occupation of the Gaza Strip and prior to that of South Lebanon. But this will only ever be brought about by resistance in all its forms, not through the PA’s submissive approach and certainly not by protecting the occupying power’s security– an unprecedented disgrace for a national liberation movement.

The Palestinian people are truly at a historic crossroads. Either to surrender their land and dignity and accept the $50 billion bribe Trump intends to extort from the oil-rich Arabs as the price for Palestine or to stay put and fight and resist this conspiracy, as all other colonised peoples have done and are fully entitled to do.

0 thoughts on “Palestine at the crossroads”