HOME / WORLD / No ‘peace’ without the Palestinians 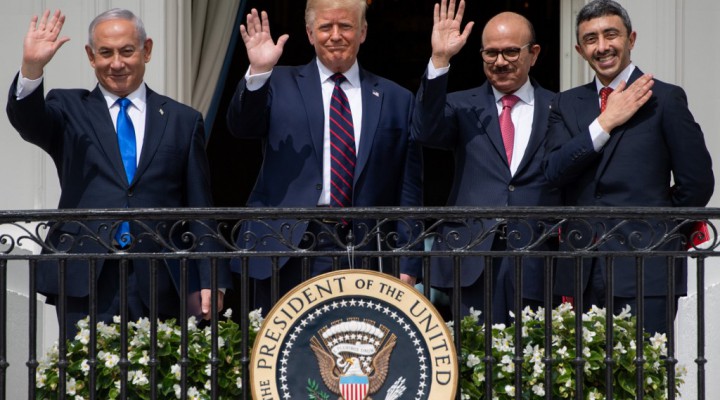 The missiles fired at Israeli settlements from the Gaza Strip while the UAE and Bahraini foreign ministers were signing ‘peace treaties’ with Benjamin Netanyahu at the White House were an affirmation: these agreements are worthless, and the only people capable of ending the Arab-Israeli conflict, by peace or by war, are the people of Palestine — with the backing of their Arab and Muslim brothers and sisters and supporters of justice worldwide.

President Donald Trump, who oversaw the theatrics in the White House garden, lied brazenly when he claimed five more Arab governments – not to use the word ‘countries’ – were set to sign similar agreements. How could these targeted governments go ahead with such a shameful step when they were too embarrassed even to send their ambassadors or lesser delegates to represent them at Tuesday’s circus performance?

The UAE and Bahrain, which walked into the normalisation trap with their eyes wide open, were thousands of kilometres away from Israeli-occupied territories and led safe and comfortable lives. The burden of the conflict fell on the confrontation states – Egypt, Syria and Jordan – and their peoples and Lebanon’s, with military support from Algeria and Iraq. With the signing of these accords, the UAE and Bahrain have turned themselves into confrontation states too: but against Iran. The Israeli military and security presence being established on their territory poses an existential threat to Iran’s national security. Their new ally’s main reason for wanting these deals was to use that presence to more effectively target Iran’s military, nuclear and other infrastructure. The prospect of business and trade deals with a country that lives on handouts (Bahrain) and another whose oil era is approaching its end (UAE) was an afterthought.

On Tuesday, Iranian President Hasan Rohani warned that any Israeli presence on the eastern shore of the Gulf would constitute a direct threat to his country, and that Bahrain and the UAE would be responsible for any attack launched from their territory against Iran.

The Israelis have never respected treaties or conventions, honoured their promises or abided by the terms of agreements they signed. The most glaring example is the humiliating experience of the Palestinian Authority (PA) with the Oslo Accords it signed 27 years ago. Can the Bahraini or UAE governments prevent Israel from using their territory to spy on Iran, send saboteurs to bomb its nuclear facilities or oil terminals across the water, or establish military bases near the Strait of Hormuz and the Sea of Oman?

During the 1990s, Israel opened trade missions in Qatar, Oman, Tunisia and Morocco, as well as an embassy in Mauritania. It took one armed uprising in the occupied Palestinian territories in 2000 for these offices all to be closed down, one after the other. The embassy in Nouakchott was even physically bulldozed and there is no trace of it remaining.

Trump declared at the White House ceremony that the Arabs in general, and the UAE and Bahrain in particular, are tired of war and their young people aspire to a future of development and prosperity. This is true. But the only war these countries were waging, along with Saudi Arabia, was in Yemen, not Occupied Palestine. And there has never been the least hint of evidence that the Palestinian cause was an impediment to their development or prosperity. Yet Trump managed to extort $460 billion from Saudi Arabia alone in a single day – more than the cost of all the Arab-Israeli wars combined, and more than 400 times the amount of aid provided to the Palestinians over the course of 40 years.

Trump also complained to journalists before the signing that the Palestinians do not respect his administration or the US generally, and that is why he cut them off from $400 million in annual aid and closed down the PLO office in Washington. He expected respect? After recognising occupied Jerusalem as Israel’s eternal capital and adopting the ‘Deal of the Century’ as US a peace initiative? Did he think the Palestinians would sell him their cause in exchange for an annual handout from his government?

Just as the second Palestinian intifada caused the closure of the Israeli trade offices in The Gulf, the embassies in Manama and Abu Dhabi could be shut down by a few Iranian or Houthi missiles as a consequence of some US/Israeli miscalculation or other.

So long as rights are denied to millions of Palestinians in the territories occupied in 1948 and 1967 and in the diaspora, there will be no peace. The latest agreements have no real value and actually pose a danger to their signatories on both sides: as they blind them to the reality and sell them delusions and mirages.

Thanks to the missiles from Gaza for shining a light on the stark reality and providing a well-timed reminder of the real essence of the conflict.

0 thoughts on “No ‘peace’ without the Palestinians”