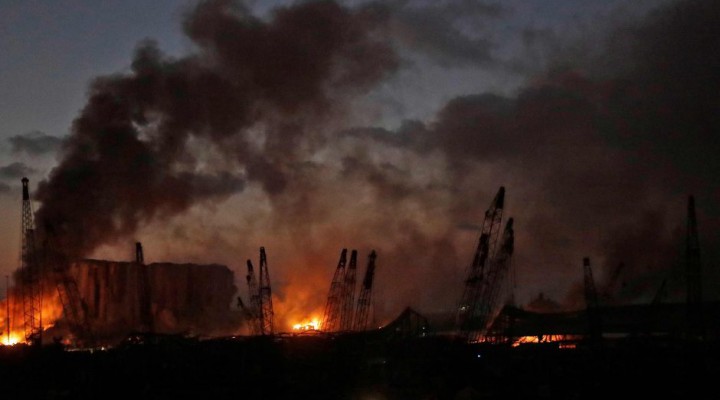 Was it an accident caused by negligence and corruption or — as Trump said – a deliberate attack?

Was the catastrophic explosion in Beirut on Tuesday that killed hundreds and inured thousands of people not a horrific accident but a deliberate attack as US President Donald Trump characterised it? If so, then the US and Israel were probably behind it and bear responsibility for it, either directly or through their clients in Lebanon. The conspiracy theory cannot be ruled out in this case: the same players have previously colluded in many proven conspiracies over the years, both in Lebanon itself and the wider Middle East, notably Iraq.

Trump was virtually the only world leader to go public and call the incident a “terrible attack”. When questioned about this description, he explained his generals had told him that the massive blast did not appear to be “a manufacturing explosion type of event” but a “bomb of some kind.”

Pentagon spokespeople later back-tracked and ridiculed their president’s remarks. But it is doubtful that Trump was just extemporising.

It is more likely he was revealing something he knew. He was, after all, talking about Lebanon, a country currently being subjected to unprecedented US and Israeli pressure aimed at destabilising it from within and threatening it with the prospect of renewed civil war in order to force the disarmament of the Lebanese resistance – all in the service of Israel.

No sooner had the explosion occurred than a Saudi-owned Arabic television channel broadcast an ‘exclusive’ report ‘revealing’ that it took place in a Hezbollah arms depot at the port, even as Lebanese officials were affirming it was an accident caused by negligence and mismanagement. This proved to be the start of a concerted campaign of Saudi- and Gulf-funded media incitement against Hezbollah and its broad constituency in Lebanon by blaming them for the blast in a bid to trigger a backlash– and to turn accusing fingers away from the US and Israel.

Investigations into the blast have barely begun and will take at least ten days and probably more to find conclusive answers about precisely what happened and who was involved. In the meantime, Trump’s remarks, which he has not retracted, sound to many Lebanese like an inadvertent confession.

Without prejudging whether it was an accident or an attack, many questions remain to be answered about the blast. Why were more than 2,500 tonnes of highly explosive ammonium nitrate being stored in the Port of Beirut? If, as reported, they were confiscated from a Moldovan ship six years ago, who owned the cargo and why was it being imported in the first place? Was it to be sent to the Syrian opposition as some reports suggest? Or was it to be used for terrorist purposes inside Lebanon to make IEDs and car-bombs?

And where did it come from? Israel has thousands of tons of this dangerous compound stored in the Port of Haifa. Was a consignment shipped to Lebanon via a third party and stored at the Port of Beirut by local collaborators pending the right time to use it? Were these local actors, knowingly or not, involved in ignoring repeated court orders to destroy or relocate the shipment?

We obviously have no answers to these questions yet, but it was right for the Lebanese government to put senior port officials under house arrest and ban them from travelling abroad pending investigations.

This disaster — which has wrecked half of Lebanon’s capital city, made 300,000 of its people homeless, and destroyed most of its wheat and grain stockpiles — is the last thing the Lebanese needed. They were already struggling to cope with a crippling socio-economic crisis, the collapse of their national currency, the coronavirus outbreak, the fallout of US sanctions, a fraught domestic political situation, and the resulting impoverishment of the vast majority of the population.

The hearts of hundreds of millions of people around the world will be with Lebanon, especially fellow Arabs who know it as a beacon of liberty and creativity and a haven for exiles and refugees fleeing oppression. This is surely the time for wealthy Arab states to step up and offer it the relief and financial support it so desperately needs, without the usual political strings attached. This is said more in hope than expectation. But the calamity could yet have a positive long-term positive effect for Lebanon. It could be the prelude to uprooting the corrupt sectarian leaders and parties and political feudalists who have been looting the country and sucking the blood and sweat of its citizens for a century or more.