HOME / WORLD / Into the Libyan Quagmire 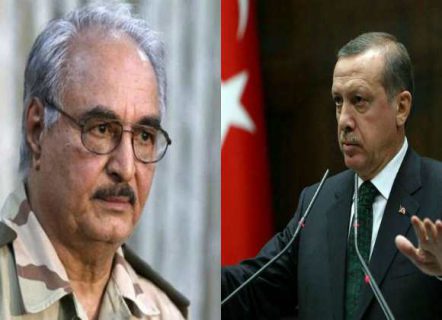 Is the proxy war for Tripoli set to escalate into a direct war between regional backers?

The threat by Field Marshal Khalifa Haftar to attack Turkish interests, airliners and ships in Libya may prove to be the most serious turn yet taken in the course of the country’s civil war. If translated into action, it would expand and internationalise the conflict and drag other regional players directly into it.

This escalation was prompted by the recapture of the town of Gharyan to the south of the capital Tripoli by forces aligned with the internationally recognised Government of National Accord (GNA). This dealt a painful blow to Haftar and shattered his dreams of overrunning the capital. He had taken the gateway town in April and turned it into the western headquarters of his mainly eastern forces, supported by Egypt, Saudi Arabia, the UAE, France and US President Donald Trump — who telephoned him in person as he began his assault on the capital.

Spokesman Ahmad al-Mesmari announced that Haftar had ordered his forces to target Turkish interests and shipping in Libya and prevent aircraft from flying to and from Turkey. He accused the country of arming and supplying the GNA and using its personnel, aircraft and ships to intervene directly in the war for the capital. The charge was not denied by President Recep Tayyip Erdogan, who said his government had provided the GNA with weapons and equipment under a bilateral military cooperation agreement.

The question now is whether Haftar will make good on his threat to bomb Turkish ships taking goods, and allegedly military equipment, to the ports of Tripoli and Misrata, and if so how Turkey will respond. Did Haftar issue these threats after consulting his foreign allies and obtaining a green light from them? Or was he acting impulsively out of anger at the loss of Gharyan?

Sources close to Haftar insist he will carry out his threat, and that he consulted his allies before making it and received their full backing. Sources on the GNA side are equally adamant that Erdogan will not hesitate to retaliate forcefully if any Turkish shipping is attacked in Libyan waters.

Turkey openly sent armoured vehicles and other military support to Tripoli. Its intervention saved the GNA from collapse and enabled it to repulse Haftar’s offensive aimed at capturing the capital, gaining control of the entire country and declaring himself president.

Erdogan was vague when asked by journalists at the G-20 summit in Osaka about his reaction to Haftar’s threat, perhaps because he did not have his political and military advisors on hand. He sufficed with saying “we will take the necessary steps if it is confirmed that this order was issued to target Turkish aircraft and ships.”

Any such attack would amount to a declaration of war on Turkey. It could draw it even deeper into the Libyan crisis, in turn prompting a counter-reaction from Egypt, the UAE and Saudi Arabia. In other words, the proxy war being waged by these countries in Libya via local clients would turn into a direct war between the patrons or principals themselves.

It is premature to jump to conclusions. But it looks very much at present as though a trap is being carefully set for Turkey, with the aim of at bogging it down in the Libyan quagmire and justifying more direct intervention by Haftar’s Arab and Western allies. Along with Qatar, Turkey was the key backer of the Libya Dawn forces that foiled their plan to enable Haftar to take Tripoli and resolve the Libyan situation in his and their favour. Will they now try to turn the tables again? The coming few days could be crucial, not just in the struggle for the Tripoli but for the future of Libya in its entirety.

0 thoughts on “Into the Libyan Quagmire”