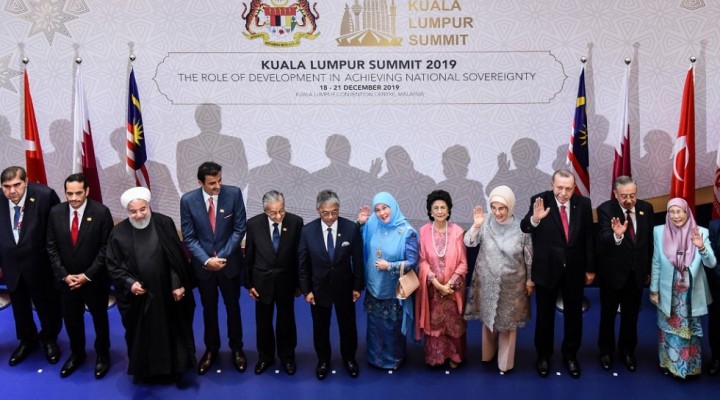 The Islamic summit which opens in the Malaysian capital Kuala Lumpur on Thursday, attended by leaders from some 20 Muslim-majority countries, is a significant development in two main respects. It sets the stage for the establishment of an alternative to the 57-member Islamic Conference Organization (IC0) as the collective voice of the world’s Muslims and challenges Saudi Arabia’s long-assumed status as leader of the Islamic world.

A new claimant to global ‘Islamic’ leadership is taking shape, and it excludes most of the Arab world. Major Arab countries such as Egypt, Morocco, Sudan, and Algeria are among those staying away from the Kuala Lumpur summit, in addition to Syria and Iraq.

This gathering was dealt a setback when Pakistani Prime Minister Imran Khan, who along with Turkish President Recep Tayyip Erdogan and Malaysian Premier Mahatir Mohamed was one of its prime movers, decided not to attend, depriving the bloc-in-the making of a nuclear-armed member. He canceled his attendance after making a surprise visit to Riyadh, for reasons which remain unknown but most observers attribute to financial inducements. However, the gathering’s pan-Islamic representative status is bolstered by the attendance of Iranian President Hasan Rohani, which affirms its non-sectarian and inclusive nature. It includes the worlds’ five largest non-Arab Muslim majority countries –Indonesia, Pakistan, Turkey, Iran, and Malaysia – with a combined population of more than 600 million and an area of 6 million square kilometers.

Turkish presidential advisor Yasin Aktai, who is described as the ‘ideologue’ of the endeavor to form a new bloc of Islamic states, also points out that the participants, for the most part, do not have oil-dependent economies, and pursue development and growth strategies based on their human resources. He implicitly acknowledges that they are effectively ‘rebelling’ against Arab leadership of the Islamic world. Asked to explain the exclusion of Arab leaders from the summit, he retorts: “Where are they anyway? They’re never there when Islam and Muslims are in danger and under threat from Islamophobia… They’re never there when this threat is a problem for which we need a solution. We started to see that their actions fuel hostility to Islam.”

Aktai’s harsh words reflect sad reality. The Arab part of the Islamic world is in worse shape than ever: laid low by divisions, feuds, wars, corruption, dictatorship, repression, and complete subservience to Western and especially American imperialism, with many of its leaders prostrating themselves at the feet of the Israeli enemy, offering it normalization and alliances.

The Arab response to the Kuala Lumpur summit should not be to mobilize media trolls to fire abuse and insults at the leaders attending the gathering. That is the course of the impotent and bankrupt. It should take the form of reappraisal and self-criticism, to understand the causes of the side-lining of some 20 Arab states headed by Saudi Arabia, home to Islam’s two most sacred places in Mecca and Madina.

For Saudi Arabia to preserve its leadership of the Islamic world it would have to abandon most of its current policies, including its war in Yemen and its utter subservience to the USA, and stand up for just Muslim causes, most notably Palestine.

The OIC, which this Kuala Lumpur summit seeks to bypass and replace, has been turned into a title devoid of any substance. It has nothing to do with Islamic cooperation, as it sides fully with its host-state. It is neither impartial nor objective and has effectively become a department of the Saudi foreign ministry, whose sole occupation is to issue statements that are never read by anyone other than those who write them, and even that is doubtful.

Any country that seeks to be a leader of the Islamic world has to set an example in every respect – in development, democracy, respect for human rights, upholding national sovereignty, good governance and uprooting corruption. It must also work toward bringing Muslims together, and unflinchingly stand up for them when they are persecuted and support their just causes.

Saudi Arabia, in particular, should be warned that more than its status and prestige are at stake. Questions are increasingly being asked about its custodianship of the two holy places, and demands made for them to be brought under ‘Islamic’ supervision. Serious thought is being give to this, and the Kuala Lumpur summit could be the start.