HOME / WORLD / After the Berlin Conference 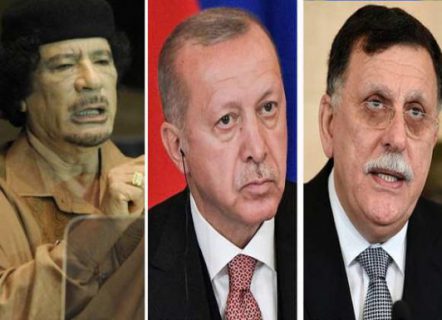 Nobody is saying it, but it has to be said. The countries currently trying to bring peace to Libya are the same countries that destroyed it ten years ago. Most of the twelve states that attended Sunday’s Berlin Conference – with the notable exception of Algeria – were and continue to be complicit in that process. They either contributed directly to Libya’s destruction or indirectly through their silence (and implicit approval) or their collusion via local or regional clients. Their victims were, and remain, the Libyan people, whose wellbeing was, and remains, the last thing on the mind of most of the Berlin conferees.
They met to share out the spoils — Libya’s oil and gas, and its reconstruction and infrastructure projects — and also to consider other, less important, matters: such as how, by reducing Libya to a failed state, they turned it into a conduit for hundreds of thousands of migrants heading for Europe’s Mediterranean shores.

Turkish President Recep Tayyip Erdogan used the gathering to warn that the collapse of Fayez Sarraj’s internationally recognised government, which controls less than 20% of Libya’s territory, would turn Libya into a hotbed of terrorism. If only he had realised that a decade ago. Thanks to him, and all the other governments that cooperated or competed with him for control of Libya and its resources, and sponsored mercenaries to fight there on their behalf, the country was turned into a failed state for the foreseeable future. The list of culprits is long. As well as Turkey it includes the governments of the US and Russia, the UAE and Qatar, plus France, Egypt, Sudan, Chad and others.

The Berlin Conference’s closing statement declared that countries that sell arms or send mercenaries to Libya should be sanctioned, and proposed deploying a truce monitoring force. In practice, however, truce terms are set by whoever has the upper hand on the ground. In Libya’s case, that unambiguously means Haftar, who was groomed and nurtured for many years by the CIA, which set up training camps for his followers, and now also enjoys the support of Russia, France, the UAE and Egypt among others.
Haftar refused to sign the cease-fire agreement brokered by Russian President Vladimir Putin in Moscow last week. He will also refuse to sign any similar agreements emerging from Berlin. Even if he does sign them, he will not respect them. The Berlin conference’s closing declaration is barely worth the paper it is written on.

By closing down Libya’s oil export terminals, which are under his forces’ control, the day before the Berlin conference, Haftar was sending a message to the participants: Issue as many resolutions as you like. But I’m in control, and most of you secretly support me, so we all know it’s an act.

0 thoughts on “After the Berlin Conference”