HOME / WORLD / A turning-point in Libya? 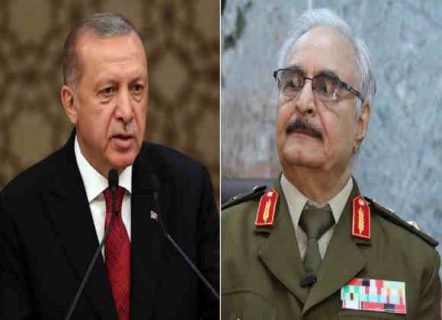 The capture on Monday of the al-Watiya airbase 140 km southwest of Tripoli by forces loyal to Libya’s Government of National Accord (GNA) dealt a powerful blow to Gen. Khalifa Haftar and his foreign backers. This setback could put paid to his ambitions to take control of the western Libyan coastline and especially the capital, which he has been besieging for the past year, unless his backers — principally Egypt, the UAE, France, Russia and Saudi Arabia  — throw their full weight behind him, as Turkey has done with the GNA.

It was striking that the pro-Haftar forces occupying the sprawling base compound, which includes arms depots and barracks that can accommodate 7,000 troops,  put up no real resistance. The spokesman for the pro-GNA forces that captured it, Mustafa al-Jamii, announced that they withdrew without a fight “in order to avert bloodshed”.

What does this mean? Did Haftar order the base evacuated after concluding that his forces could no longer hold it? Did they suffer a collapse in morale and flee? Or was a deal struck under which the base was effectively handed over?

Military experts doubt that was the case. TV footage taken after the base was seized showed warehouses filled with military equipment and ammunition. If Haftar’s forces had made an orderly withdrawal, they would presumably have taken those supplies with them.

There is another theory: that Haftar was summarily abandoned by some of his external backers, notably Russia and France. They have made no secret of their disapproval of some of his recent decisions: his proclaiming himself Libya’s sole ruler; his renunciation of the UN-brokered Skheirat agreement, and his row with the speaker of the internationally-recognised Tobruk-based parliament, Ageelah Saleh.

The failure of these allies to rally to Haftar’s aid as he steadily lost ground in western Libya in recent weeks may be a mark of this disapproval. This stands in stark contrast to Turkey, which has provided massive military and logistical support to GNA forces.

Another difference is that none of Haftar’s allies is prepared to commit their own forces to fight in Libya. They have sufficed with providing military equipment and advice and funding mercenary forces from Sudan and Chad. But Turkey has thrown its full weight behind the GNA, airlifting sophisticated weapons, drones and air defence systems to the country in addition to sending military advisors and – according to ‘neutral’ Libyan sources’ – some 7,000 Islamist fighters, including Syrians, Turkmen, Chechens and Uyghurs.

What happens next is anyone’s guess.

Haftar’s backers may have concluded he stands no chance of capturing Tripoli and opted to scale down their support temporarily to press him to show more flexibility and sign up to the peace processes proposed at the Moscow and Berlin conferences, which he unceremoniously rejected.

Alternatively, they could throw caution to the wind and intervene more forcefully on his side, if only to prevent their Turkish adversary from scoring a military triumph and establishing an overseas base in Libya (in al-Watiya) as it did in Qatar. That could be the making of a major regional war.

Another possibility is that Haftar’s forces retreat to their strongholds in eastern Libya and abandon their ambitions to conquer the capital. That would raise the prospect of the country being partitioned into its three pre-independence components:  Tripolitania in the west, Cyrenaica in the east and Fezzan in the south.

But Haftar’s setback could also enable the launching of fresh negotiations to arrive at a peaceful solution and an alternative political accord to the Skheirat Agreement. Saleh has proposed a new deal that would entail re-constituting the Presidential Council and forming a new government in a way that shares out power between the three regions, as well as establishing a new constitution-drafting commission. Renewed talks based on an amended version of Saleh’s initiative cannot be ruled out in the weeks ahead.

All depends on how Haftar’s external backers react to his defeat at al-Watiya. So far, they have had said almost nothing about the subject.

Meanwhile, Turkish President Recep Tayip Erdogdan has won around, and the GNA and its supporters are celebrating their triumph. Can they build on it and go on to take western and central cities held by Haftar’s allies such as Tarhouna, Sirt and Bani Waleed? Or will their celebrations prove short-lived? GNA head Fayez Sarraj was careful to describe the capture of al-Watiya as an “important battle” and avoid claiming complete victory. In today’s Libya, the only thing that can be confidently expected is more surprises.

0 thoughts on “A turning-point in Libya?”